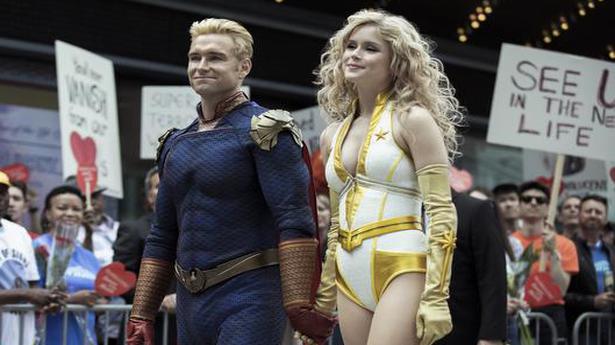 With heavier themes and subject matter to deal with, the second season of the superhero show is slightly less fun, but as compelling a watch as ever

First things first. The second season of The Boys ups the ante on the violence and gore (faces and heads are the biggest casualty, not to mention that whale featured in the trailer). Sure, you might find your face locked in a grimace, but the good news is that the second season makes for compelling viewing. The stakes are higher, the parallels to present-day America clear, and importance has been given to the characters’ emotional journeys.

To recap, the first season ends with Vought sitting pretty. Terrorists across the world are in possession of Compound V, the US government is now dependent on Vought to stop them, the Pentagon has decided to keep the existence of Compound V classified, and the Boys are fugitives. After Homelander kills Madelyn Stillwell, and Billy Butcher sets off the explosives strapped to her body, he regains consciousness to discover that not only is his wife, Becca, alive, she has a son by Homelander. Meanwhile, Starlight isn’t in the clear with Homelander just yet, A-Train has a heart attack, The Deep is languishing in Sandusky, Ohio, and Queen Maeve has decided to put personal happiness aside.

Season 2 sees the addition of several new characters, including new induction into The Seven: the powerful Stormfront. While she understands that most millennial of things — how to harness the power of a good meme – it is also clear that she has her own agenda.

We also meet Alistair Adana, the charismatic head of the Church of the Collective, a cult-like organisation that takes its members’ money, chooses wives for them, and has been the subject of a documentary. Sound familiar? Another new character is Victoria Neuman, a young Congresswoman who is trying to hold Vought accountable.

With the threat of super terrorists/villains emerging, this season also deals with subjects that are burning issues in a real-world context such as anti-immigrant sentiment, nationalism, racism, white supremacy, stoking fear and anger among the public, and the possibility of attacks in schools.

There is also a scene where in a reflection of real-life, we see Starlight and Stormfront subjected to inane questions by entertainment journalists on how it feels to be a girl superhero (their complaint that their clothes don’t have pockets is wholly relatable though).

There is also focus on larger themes and questions such as nature vs nurture, self-acceptance, the idea of masculinity, family, guilt, redemption, and relationships: whether its fathers and sons, mothers and their children or the bond between siblings.

Like in the first season, the production value is excellent.

The cast is uniformly good. With several characters spiraling out of control, those actors consequently get a chance to show off their acting chops.

However, it is Karl Urban as Billy Butcher who shines this time around. You can’t help but miss Butcher’s cocky, smug presence when he is not there. Antony Starr is also in good form as Homelander as is Aya Cash as Stormfront, Giancarlo Esposito as Stan Edgar, Karen Fukuhara as Kimiko (communicating through expressions and body language), Erin Moriarty as Starlight, Jack Quaid as Hughie, Tomer Capon as Frenchie and Laz Alonso as MM, the calm, cool voice of reason.

Of course, with heavier themes and subject matter to deal with, one small quibble with this season is that it is slightly less fun. In addition, while Queen Maeve (Dominique McElligott) is a powerful superhero, her storyline is such that she spends a lot of time without much agency.

There is a lot of great music this time around as well. The soundtrack includes ‘Sympathy for the Devil’ by The Rolling Stones’, ‘Psycho Killer’ by Talking Heads, ‘Dream On’ by Aerosmith, ‘God Only Knows’ by The Beach Boys, The Golden Girls theme song and of course, Billy Joel, Hughie’s favourite, with ‘Pressure’, ‘ You’re Only Human (Second Wind) and ‘Only the Good Die Young’.

While Hughie’s T-shirt collection is not as extensive this time around (what with being on the run and all), MM gets some good ones featuring bands such as Wu-Tang Clan, RUN DMC, and Public Enemy as well as one with the Black Power fist.

The Boys Season 2 will stream on Amazon Prime with the first three episodes from September 4, and new episodes every Friday after that