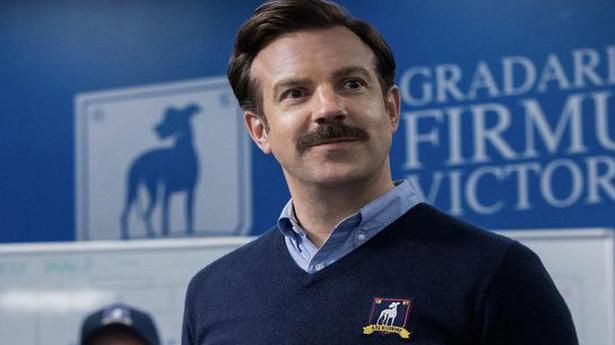 Jason Sudekis plays an American coach of a football team in England in this feel-good comedy on Apple TV+ that sticks to a template, but endearingly so

‘Same… Same, but different,’ says Ted Lasso, an American football coach hired to train an English Premier League team, as he walks on to the field for the first time. The brevity of the sequence notwithstanding, the line somehow surmises the essence of the show, developed from an ad campaign for NBC Sports.

The idea of extrapolating a show, out of a character, that was part of video snippets intended to acquaint the U.S. audiences with British football, may seem like a preposterous exercise. It is then gladdening to discover that the final show is anything but.

Played by Jason Sudeikis, Theodore Lasso a.k.a. Ted, is hired by a freshly divorced Rebecca Welton to coach Richmond FC: the club that was nurtured by her cheating husband Rupert and has now been inherited by her after their separation.

Entrusting coaching duties to Ted —a stranger to the sport and the continent — is merely a ploy by Rebecca to choke the struggling club before its impending death and get back at her former partner.

Never aware of his boss’ ulterior motive, Ted is faced with the classic underdog dilemma; one where he has to battle the hostile crowds that turn up for the matches, win the respect of his players and prove his mettle to Rebecca.

With an ever too familiar template in place, the show’s intentions are honest and straightforward; without striving for dramatic moments, it sticks to a light tone and traces the beats of a warm, funny, feel-good story.

However, it is the manner in which this is achieved that brings about an air of difference to the proceedings. Relegating the sport to the background, the show trains focus on Ted Lasso and the relationships he forms with the people around him.

This is best conveyed through the scene, in which, when asked about the nature of his job, Ted says “I don’t care if we win or lose matches. I am here to help these players become the best version of themselves.” A rather unlikely outlook for a sports coach to have.

Save for such quirks, Ted Lasso is a familiar and immensely likeable person. An overly enthusiastic guy, Ted goes about as if it is his purpose in life to spread joy, and initiating unsolicited conversations while at it: a practice that doesn’t bode well with other people, especially his employer.

But, aside from the obvious jabs at the differences between the two sports and cultures, it is this sparring between the personalities of Ted and those around him that adds heft to the story. Watching Ted get through to people and circumvent obstacles, all the while doing it his way, is both delightful and heartwarming.

In hindsight, it could feel as if the resolutions to Ted’s conflicts came about rather easily. That is only because the plot reins itself in before straying into drama territory— a trait that is forsaken occasionally as the show progresses.

The drift in tone comes to the fore when Rebecca forms an unlikely friendship with another woman or when she makes a statement about how the press treats the women unfairly during a divorce; Ted faces issues because of ‘too much optimism’ or when he proves that there’s more to his personality than just an animated exterior.

These instances, along with slick production design, may run the risk of coming across as superficial. But Ted Lasso subverts the emotional moments into minor nuances that serve to complement the story.

The cast of Ted Lasso help in no small measure in lending the show an authentic feel. Jason Sudeikis, in a role that requires him to be mostly polite but occasionally vulnerable, tows a fine line by staying firmly on the charming side and not letting the performance slip into annoying. The supporting cast, including Hannah Waddingham and Juno Temple who play Rebecca and Keely —characters that headline scenes on multiple occasions —play their parts to perfection.

In the end, to quote a journalist who interviews Ted: “It is hard not to root for him,” for Ted Lasso is best described that way.