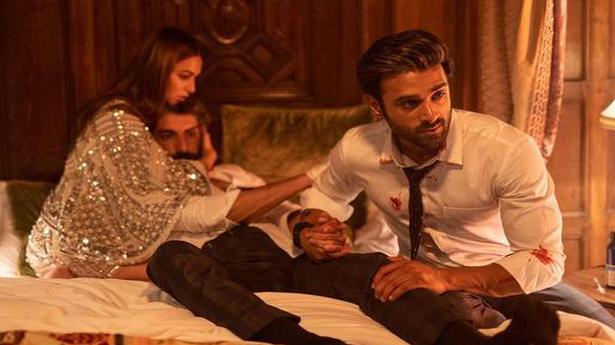 In Bejoy Nambiar’s experimental take, his love for visuals shine through, but little else does

Watching an action sequence unfold in a washroom, it is hard not to think of Mission Impossible: Fallout. That 2018 action movie starring Tom Cruise saw three men beat each other to pulp inside a men’s washroom.

Bejoy Nambiar — whose shootout scene from Shaitan, a black and white segment from David and a striking still of a knife jammed into a music player in Wazir, have earned him a reputation for slick visuals — fashions something similar at the start of Taish.

While Fallout, with a mostly static camera set-up, had a prolonged stunt scene, Bejoy Nambiar keeps it brief, with the camera hovering freely around the two actors as they have a go at each other. With swift, abrupt cuts, clarity does take a hit, but efficacy is still retained.

Things, however, get slightly better in the next sequence. A brooding man barges into a room where his lover’s wedding is underway. Having already shot a person on his way, he now threatens the groom. The entire sequence is captured in a single shot serving as an establishing shot for one of the characters.

Taish featuring Jim Sarbh, Harshvardhan Rane, Pulkit Samrat, Kriti Kharbanda and Ankur Rathee, shines in these initial portions. Unfortunately, the chinks in the armour surface as soon as the dialogues begin to push the narrative forward. Characters struggle to shrug off the expository nature of their conversations.

Originally planned as a feature film, Nambiar and his editor reworked Taish to release it as a two-and-a-half-hour movie and six-part show simultaneously. Nambiar does partial justice to the web-show format by eking out a narrative high at the end of each episode.

However, Taish’s failure lies in its inability to exploit one of the luxuries afforded by the medium: scope for character development. The lead characters —Jim Sarbh’s Rohan, Pulkit Samrat’s Sunny, Harshvardhan Rane’s Pali and Ankur Rathee’s Krish — all come with their baggage. Yet, only Pali’s vulnerabilities come through on screen.

Pali, unlike others, gets dedicated scenes to convey the cause and effects of his actions. Expectedly, Harshvardhan Rane and Saurabh Sachdeva (who plays Pali’s right hand) make the most impact.

With the other characters, revelations about their past are reduced to a few lines giving them hardly any time to breathe. In a feature film, this may not have mattered as much for lack of distraction. But, in a six-part series, strewing in plot points casually robs it of its heft and comes off as contrived rather than organic.

By hinting at themes like anger, revenge, action and consequences, Taish shows great ambition, but fails in execution. Working against the cause are the characters, who seem like an extension of Nambiar’s Shaitan. Their idea of wading through a crisis situation is by shouting and talking over each other; reducing themselves to overgrown kids with high profile jobs, during the process.

By the time the narrative comes to a close, supporting characters have changed their minds and backtracked on decisions at the drop of their hat, leaving doubts about their motivations — and the proceedings have been mostly bereft of logic.

The only thing that still shines through is Nambiar’s love for the visual medium, with scenes such as this: the image of a wheelchair-bound man, undone by his own actions, staring at the bottom of an oval mirror resembling a noose over his head. But all the style doesn’t make up for the lack of substance eventually.

Taish is currently streaming on Zee5