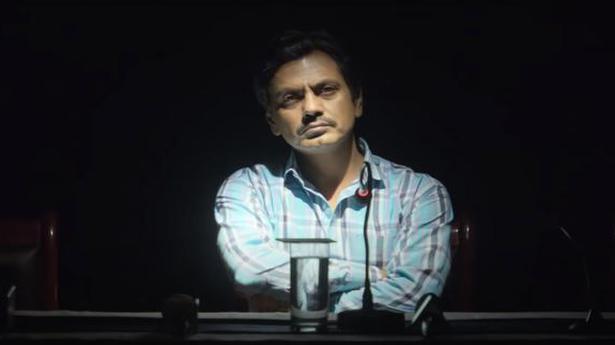 This Sudhir Mishra-directed film is a satire and an incisive look at caste and its subsequent social construct that is part funny, part ambitious and a tad generic

There are few movies that have a particular scene or moment you may have missed but lingers on, making you replay it from the beginning, in your head, just to make sense of it as a whole — it is just for the sake of pleasure, sometimes. Like this consequential scene that arrives in the opening portions of Serious Men, which, at that point, seemed quite inconsequential. Early on, we see Ayyan Mani (Nawazuddin Siddiqui who is fantastically defiant and who is more “Mumbaikar” than Tamil) entering the premises of National Institute of Fundamental Research, perhaps, the most elitist of organisations — where he works as a personal assistant to his Brahmin boss, Arvind Acharya (Nasser) — and pausing at a white board which has the following text: “Indians who write in English don’t understand India.” Absolutely true, no doubt. But what makes it an interesting commentary is the name of the person to whom it is attributed: Saravana W. Perhaps they meant Savarna?

Ayyan flips the board to a text that reads this: “Reservations cannot be the only compensation to treating fellow human beings like animals for the last 3,000 years.” It is a note supposedly written by a Tamil: Arivunambi Ghatak, whose Bengali surname is borrowed from a master filmmaker. Without much thought, Ayyan quickly changes the name to Nobel Laureate Amartya Sen. He gets caught sheepishly by a colleague who says, “Ayyan, Sen never said this. You’ll get into trouble for this, one day.”

He does not realise then nor does he seem to care either, as long as it delivers the point and as long as “someone says it”. Now whether people would buy into this cooked up text because it has Sen’s name attached to it, is besides the point. What matters is the brand associated with Amartya Sen, more so his reputation as an intellectual, even if it is among the urban elites, a small but influential subset of the population to which this film speaks to. This seemingly small act of deviousness — in wrongly attributing Sen’s name for a certain kind of, how do I say, “respect” and to be heard? — is the larger politics of Serious Men and a weapon Ayyan chooses (wisely) to wield against a system that has systematically shut the doors and windows, and denied opportunities for Dalits, who continue to live in the dark, making love to their spouses/partners in their suitcase-sized houses, in slums.

Serious Men opens with the narrator talking about his favourite song, which has the lyrics to the effect of: “The umbrella of night has so many holes. Who poured acid on it…is an unsolved mystery.” It is played over loud but cautious moans of a lady having sex with her husband, the narrator and also the protagonist: Ayyan Mani. He does not know much about the song or what it means, except that it applies to all situations. And the song is played exactly thrice, or three decisive moments in Ayyan’s life: when he was a nobody, when he becomes somebody and when he goes back to being a nobody.

We see Ayyan’s despondency to be somebody. Through a casual exchange with his wife Oja (Indira Tiwari), we not alone get a sense of who he is — a second generation or a 2G Dalit and the first in the family to get access to education — but also his fairly simple worldview. “It takes four generations for someone to do nothing at all,” he says. Ayyan is not the Angry Young Man who wants to change the system; his desires are ordinary and perhaps, fatherly. He hopes his son raises above the system to become a 4G, an urban elite who makes nonsensical presentations like the significance of dotted condoms.

Ayyan is just a “molecule” in this society, but it is his son Adi (Aakshath Das who looks like that boy from Kabhi Alvida Na Kehna) who is the apple of his eye and an atom that causes a chain reaction. He uses Adi to change his status among the privileged or rather “primitive minds” — the words his boss uses as some sort of a slur, apart from the everyday slurs: moron, imbecile and knobhead. Watch out for Ayyan in the scene where Acharya gives a press conference; he becomes the judge to his own court of law.

So, when you have decided to revolt, or perhaps, fool the system and its beneficiaries, how do you devise your plan of action? More importantly, how do you speak to them? Yes, in a language familiar to them: exploitation. Every character inhabiting Serious Men is morally ambiguous, has ulterior motives, and is exploiting one another, either for power or for social status: Acharya needs funds for his lavishly dumb projects to prove the existence of aliens — which might not even stand a chance at science fair. Therefore, he is looting from the Government. Adi’s high school principal, a nun, feels “sorry” for Ayyan’s social-economic background and tries to exploit his situation by offering a quick fix: conversion with the promise of a scholarship. The Bahujan leader and his daughter who find “Ambedkar and Einstein” in Adi are unapologetic in their approach: they need a face for the party and to win the people’s trust for slum redevelopment. Ayyan is already trading his son’s innocence for social status that was denied in the first place. He coaches and prepares his son like a lab rat — the kind Acharya would approve of. The only characters without false intentions are Adi and Oja.

Adi becomes the cynosure of all eyes…he becomes Ayyan’s Amartya Sen. But, how would society believe that a) this boy is indeed a Dalit and b) that talent lies not in colour but in DNA? In a sharp, split-second scene that is both clever and insistent, Adi poses for a photoshoot holding a board that says: “100% Dalit” — the sort of arid humour that runs in Manu Joseph’s columns. You often laugh at the expense of Ayyan and his struggle to break out, but the joke is really on you, on us. Ayyan, too, realises the joke, the circus he has become…he is not just caught in a rabbit hole but a black hole that starts collapsing from the inside.

Based on Manu Joseph’s novel of the same time, Serious Men, as a film, begins to look cluttered in the latter half and you could sense the struggle to give a proper ending to this game of Snakes and Ladders. And the writers (Abhijeet Khuman and Bhavesh Mandalia) could have done away with the Tamil dialogues and Tamil identity that neither are character traits nor add anything, except a once-a-while reminder that the primary characters are Tamil…it could have been about a Mumbaikar and it would have made no difference. Acharya’s hush-hush affair with his secretary is slipped into the film…for what greater good? For Mishra’s part, the film looks too clean to be true, for, the conflicts are simple and the resolutions are much simpler.

Serious Men is well-intentioned and has the frustration and angst and more importantly, the voice of a Dalit. But it lacks the anger you would find in the protagonists of a Pa Ranjith or Nagraj Manjule. Perhaps too primitive, too “English”?

Serious Men will stream on Netflix from October 2