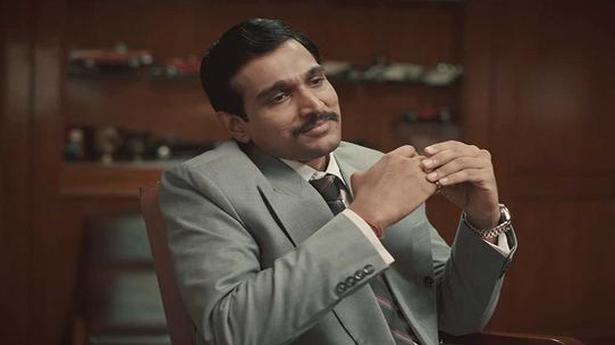 A fragile economic system on the brink of turning itself inside out. A madcap wheeler-dealer’s indomitable drive to make a fortune. A relentless truth-seeker on a mission to expose the unprepossessing face of naked greed. This is the story of an era when a single man’s unabashed debauchery crashed the Bombay Stock exchange single-handedly, and with it, the aspirations of an entire generation.

Hansal Mehta’s Scam 1992: The Harshad Mehta story revisits this story of India’s first major financial fraud by making use of some brilliant writing and succinct acting chops of its lead actors. The show kicks off with Harshad Mehta’s meteoric rise from humble beginnings, as he becomes the ‘Big Bull’ of Mumbai’s Dalal Street.

Subsequently, this self-styled ‘Amitabh Bacchan of the Bombay Stock Exchange’ partakes in siphoning funds to the tune of ₹1000 crore from India’s financial markets. This sets in motion a chain of events which ultimately ends up in the 1992 stock market scam. The amount of money, which was wiped out by this financial catastrophe, was more than that in India’s education and health budgets at the time.

It was a journalist by the name of Sucheta Dalal who first exposed Mehta’s dubious financial undertakings. Later she wrote a book about it with her husband Debashish Basu titled, The Scam: Who Won, Who Lost, Who Got Away on which this SonyLIV web series is based.

At the heart of Scam 1992 lie the powerful, yet effortless performances by Gujrati theatre/ film actor Pratik Gandhi and former beauty queen Shreya Dhanwanthary. Gandhi brings to life Mehta, portraying him not as a sinister creature with foreboding intentions, but a man of flesh and blood. Dhanwantary, on the other hand, masterfully captures the frustration and angst that the real-life Sucheta Dalal was subjected to, as she embarked on untangling the crisis that Mehta left in his wake.

As for the depiction of India’s financial markets, the show, unlike its Indian predecessors, refrains from portraying it as a surreal fairyland where one can become rich overnight. Instead, it invests in explaining heavy market jargons like “Ready forward deal”, “Statutory Liquid Ratio” (SLR) and “Bank Receipts”(BR) — making it easy for the viewers to stay updated with Mehta’s conniving endeavours.

The show’s production design and cinematography too are of high quality as the crew manages to effectively give us a taste of the bygone period with much elan.

The Bombay of the late 70s, 80s and the early 90s was very different from the present-day Mumbai. It may not exist anymore, but the memories of people who lived in it, still do. The show does a brilliant job in recreating its old glory days, so much so that the city itself becomes a character in the tale.

Trademark drone shots (a staple in most recent dramas) at the start of each episode and the effectual use of camera angles light up each frame and provides viewers with a unique perspective to the story. The revolving dolly shot of Sucheta Dallal, conducting an interview of Mehta at one of the most crucial points of his story, stands out.

The show’s biggest flaw, however, is how it chooses to portray its supporting characters. The likes of Nikhil Dwivedi, K.K. Raina, Ananth Narayan Mahadevan and many others seem to be stuck in roles which wholly revolve around the lead character. Even when Pratik Gandhi’s Harshad Mehta is not seen on screen, the auxiliary characters seem to be only talking about him, plotting on how to get even or just bluntly cussing him out. Satish Kaushik as the head of the “bear cartel” shines nonetheless with his unforced comic timing and sombre poise, bringing an element of humour to the mix.

One also strongly feels that some of the over-the-top dialogues and on-screen gimmicks could have been avoided. Case in point, the “risk hai to ishq hai” dialogue which pops up now and again during the show’s runtime, seems unnecessary and even forced.

In a nutshell, Scam 1992: The Harshad Mehta Story is a well-written show with its lead characters doing all the heavy lifting. Despite its flaws, it provides an intriguing sneak-peek at the untapped potential of homegrown content creators — and what they are capable of — if allowed to run wild with their imagination.

Scam 1992: The Harshad Mehta Story is currently streaming on SonyLIV

‘Vikram Vedha’ movie review: Hrithik Roshan runs away with glory in this absorbing game of cat-and-mouse