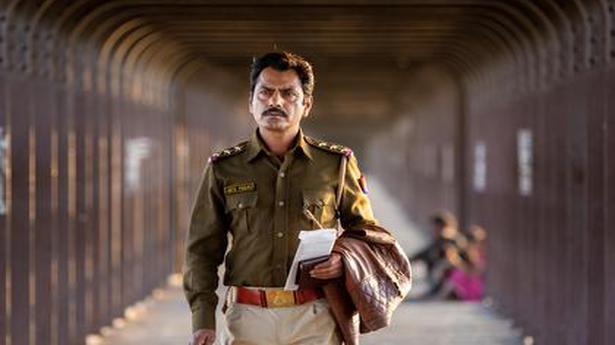 The whodunit starring Nawazuddin Siddiqui and Radhika Apte is so focused on misleading the audience, that it loses its hold over characterisation

A whodunit set in the confines of a haveli, during a wedding of an old man with a young bride, where the entire family is a suspect, is a ripe setting for a classic locked-room mystery. Raat Akeli Hai parachutes the audience into this scenario and has a captivating start to the narrative, up until a point where the film starts leaving this cloistered setting and steps outside, literally and figuratively. That’s when the mystery starts tapering and enters the realm of contrived storytelling, where you question plausibility as well as how clever the revelation is. Although crime thrillers are supposed to be inherently contrived, Raat Akeli Hai is so focused on confusing and misleading you that it barely drops hits along the way, and the effort to surprise is quite evident in the climax.

Narrated through the eyes of inspector Jatil Yadav (Nawazuddin Siddiqui), Raat Akeli Hai functions on two levels: a crime mystery and romance saga. While the two are closely interlinked and interdependent, the latter isn’t fully actualised and feels like an impediment to the mystery, rather than an asset. The build-up to the big reveal is expected to be misleading but it’s not terribly satisfying. It would have been doubly sharp had the film tricked its audience into being distracted while the answers are right under their nose.

What works in the film’s favour is its characters and actors. At the forefront is Siddiqui, a middle-aged policeman, who applies fairness cream to lighten his skin and wants a ‘homely’ girl to marry. His strangely progressive mother, essayed quite comically by Ila Arun, just wants him to marry and settle down, irrespective of who the girl is. At the crime scene the haveli — there are a bunch of intriguing characters. Among which is Radha (Radhika Apte), a prostitute sold by her father to marry the dead landlord. She has a mysterious presence, which soon fizzles out. Beyond a point, Apte is unable to add much complexity to the character, which otherwise had tremendous potential to add a layer of suspense and deceit to the film.

Underneath the thriller is a layer of commentary on patriarchy, misogyny and abuse. Patriarchy is both a direct evil and a force that drives the film. The women in the movie, as well as Jatil, are bound by patriarchy, and it influences several decisions. Thankfully, the commentary is neither overpowering nor didactic.

The hinterland setting works quite well in favour of Raat Akeli Hai. A Muslim butcher who doubles up as a hitman, and a Hindu politician discreetly running a tannery in a Muslim-dominated neighbourhood are fascinating details that help root the mystery in its rustic setting. Even the dialogues, some quite wittily delivered by Siddiqui, make the film enjoyable. Among the actors, Padmavati Rao, Shreedhar Dubey and Aditya Srivastava are the most compelling. Even though inconsequential for a large part, Rao gets her moment of glory, but Dubey makes a mark despite being relegated to the background. Srivastava, fondly remembered for being a loyal investigator in CID, is on the other side of the law in this film, playing a slimy and repulsive politician.

In its first one hour, the film does a competent job of ushering you into this murky crime and twisted household but then, somewhere along the way, loses its hold over characterisation in the pursuit of being a shocking thriller. Sure, the end is surprising but the film misses that vital feeling of being a step ahead of you and the detective, even when you think you’ve got it all figured out.