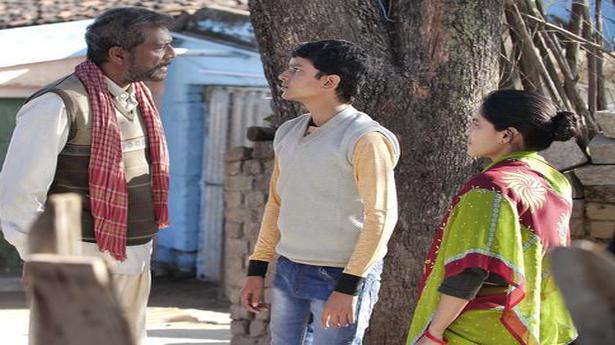 While making some pertinent commentary on access, privilege and language, the film dodders under the weight of archaic melodrama

The recently unveiled National Education Policy (NEP) 2020 recommends using the mother tongue or local language as the medium of instruction in a child’s early education, wherever possible. The policy has its supporters and critics with valid arguments on both sides. Does local language enhance the quality of education or is English a language of upward mobility?

In Prakash Jha’s Pareeksha, we see a glimpse of this discussion play out in the life of a cycle rickshaw driver Buchi (Adil Hussain), who transports kids of wealthy households to a private school, Sapphire, in Jharkhand. He assumes English education in a CBSE school to be the sole escape out of poverty for his family, and resorts to petty theft in order to enrol his only son, Bulbul (Shivam Jha), in Sapphire.

Against the backdrop of NEP, the film finds a compelling (and unintended) relevance, as Bulbul, a clever and precocious kid, struggles to assimilate into an English speaking environment. He has a much better grasp over physics, chemistry, and maths — subjects he learnt in a Hindi-medium government school — than his classmates in Sapphire, but falls behind with his inability to speak English adequately. Through a highly dramatised narrative, the film brings forth the fundamental conflicts between class, language and education in India, and makes some pertinent observations.

At the heart of the film is a story of an underdog and Pareeksha goes all out to desperately evoke sympathies. We see the mother, Radhika (Priyanka Bose), working overtime in a utensil factory and Buchi slipping further into the world of theft to pay their son’s exorbitant fees.

Hussain constantly has a frail and dejected body language, at times whimpering with hands folded and head bowed down. It’s hard not to feel bad for Buchi, but one wishes the character had some agency or complexity. Bose balances out her weakness with moments of strength, and is compelling as the emotionally stronger parent. Jha as Bulbul is easy to root for, as a fairly mature kid with aspirations and dignity.

The film is well-intended but half-way through becomes unnecessarily melodramatic with the introduction of SP Kailash Anand (Sanjay Suri), a good Samaritan who worked his way up from poverty. Once his character enters the scenario, the film loses its appeal of observational storytelling and becomes weepy, hammering in the value of education repeatedly.

The film opens with the sound of the azaan blending into temple bells. It’s a harmonious setting and poverty isn’t maudlin. The first half has a few subtle audio-visual motifs like these, which help us peek into contemporary Jharkhand. But the second half of the film is repetitive and feels staged in comparison to the first.

Even though the film showcases class inequalities in Jharkhand and how it impacts education and literacy, there is a nagging elimination of the role of the caste and gender divide in education. While caste is never truly addressed, let alone as explicitly as class, the role of gender is also largely brushed aside. Granted a film can’t address all aspects of society, and Pareeksha makes a few pertinent observations in the area it chooses to address, but it fails to bring other inherent complexities and contradictions one can’t overlook. There is always a possibility to dig deeper and explore beyond the most obvious binaries.

Pareeksha is currently streaming on Zee5