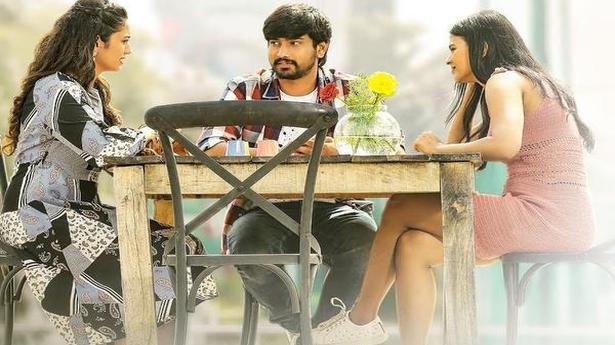 Orey Bujjiga, streaming on Aha, was initially scheduled to release in theatres for Ugadi. Had COVID-19 not played spoilsport, it would have been one of those films that never aimed high, but managed to give its viewers a few laughs during a festive weekend. The film doesn’t take itself too seriously and hopes that the viewers too will give in to the light-hearted fun and overlook its pitfalls.

Director Vijay Kumar Konda takes up a story that feels like a mix of several situations, characters and plot points of films in the mid-90s or early 2000s. Sreenu alias Bujji (Raj Tarun) takes the first train out of Nidadavolu when the first talk of wedding crops up at home; his heart is set on someone else. Krishnaveni (Malvika Nair) takes the same train to run away from her impending wedding. Someone spots the two on the train platform and assumes that they are a couple on the run.

The two, though, don’t know each other. They meet on the train, and she doesn’t reveal her true identity. Anyone who has watched mainstream entertainers would know that the two will inevitably fall in love, after a spate of incidents that intentionally and unintentionally evoke laughter.

The families are at loggerheads. Posani Krishna Murali as Bujji’s father is at the receiving end of the wrath of Krishnaveni’s mother (Vani Vishwanath). Bujji has to trace Krishnaveni and prove that he has nothing to do with her running away from home, to save his dad’s fortunes. And Krishnaveni has to find Bujji to prove her side of the story.

The initial hour or so is packed with laugh-aloud moments. There’s nothing too striking, but it’s not bad either. Sid Sriram is also called in to add his charming touch to the blossoming romance through the song ‘Ee May Peremito’ (composed by Anup Rubens).

However, the later portions become a drag. The hospital scene involving Sapthagiri and Raj Tarun begins on a fun note but goes on and on until you feel like giving up with the rest of the film.

Apart from a few comic segments that overstay their welcome, the lack of depth to some of the characters makes the film disappointing. On paper, Vani Vishwanath’s character might have appeared like a complex woman of power, but it doesn’t translate well on screen.

Raj Tarun portrays an effervescent youngster as usual and Malvika gets ample scope to show that she can also be good in fun parts. The portions that show her as a pragmatic young woman who knows to guard herself on social media deserve a mention. Hebah Patel is effortless in her brief appearance as an opportunist.

At 149 minutes, Orey Bujjiga is way too long for an old predictable tale full of gags.