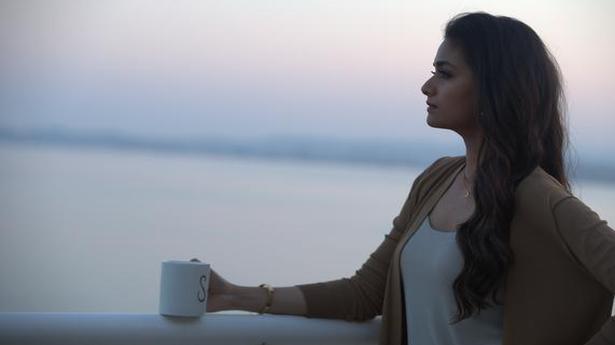 In a conventional mainstream film, even a few years ago, a businesswoman would be portrayed as a haughty shrew who needed to be tamed. Not someone who can lead by example. In that sense, it’s rare to have a story woven around a female protagonist who dreams of building a business empire on her terms and be unapologetic about it.

Debut director Narendra Nath who has written Miss India (streaming on Netflix in Telugu, Tamil and Malayalam) along with Tharun Kumar, pits a young woman who hails from a middle class Indian family against a business giant in the US. Why the US? Because the idea is to sell Indian chai in a coffee-dominated market. A girl who understands the therapeutic effects of chai with different herbs made by her grandfather, an Ayurvedic practitioner (Rajendra Prasad), wants the world to appreciate it. Narendra Nath also weaves in issues of cut-throat business and everyday sexism.

Manasa Samyuktha (Keerthy Suresh, who insists she isn’t just Samyuktha but Manasa Samyuktha through the film)’s family lives in Lambasingi near Visakhapatnam. Samyuktha is a class topper and when asked about her future plans, says she wants to be a businesswoman. Even as a passing reference, we don’t get a hint of who or what inspired her.

Years later, when the family falls on hard times, her mother (Nadhiya) and older brother (Kamal Kamaraju) assert that she should look for a job that guarantees financial security. It’s a familiar conversation one would hear in many homes. This argument continues even after the family shifts to San Francisco where the brother has landed himself in a well-paying job and affords a spacious villa.

Samyuktha’s gradual transition from India to the US is shown more through her styling than through the cultural changes. To give credit where it’s due, the director doesn’t make her an overnight woman of power. There’s enough room to show her trying to find her voice and assert herself.

There are hints to show that Samyuktha is no pushover — when she turns up in a black outfit after Naveen Chandra tells her that it wouldn’t suit her, and when she tells a colleague that a bridegroom cannot be ‘a good match’ if he and his family expect her to give up her dreams. And no, she doesn’t agree to a man’s proposal of ‘a simple life, a simple wife’ — in other words, a life with no scope for her entrepreneurial dreams.

When she takes the first step towards her business, the director creates ‘mass’ moments. She has an idea, which is snubbed by the proprietor of a coffee chain, Kailash Shiva Kumar (Jagapathi Babu). In return, she remarks that fate will decide whether she will reach his level of success or surge past him. For all that smart talk, she hasn’t even done a Google check on him. She doesn’t know what he looks like when they first meet!

Nevertheless, the business tug of war has a few fun moments to show that Samyuktha is a smart cookie. It could have definitely been a smarter battle of wits.

Miss India (the name of her chai brand) is well intentioned to show a woman fulfilling her dreams but it would have benefited from better writing than lame lines such as “Coffee is not my cup of tea”.

Also, chai isn’t alien to the US. Many Indian restaurants serve it and there’s the Chai Tea Latte of Starbucks. Just saying.

This chai-coffee tale feels underbrewed, despite the efforts of Keerthy Suresh and Jagapathi Babu. Rajendra Prasad and VK Naresh manage to make a mark within the limited scope their characters are given. Sumanth Shailendra fits the bill of a venture capitalist

Miss India seems to sell only chai; there’s no glimpse of short eats to go with the cuppa. It feels incomplete, just like the film.