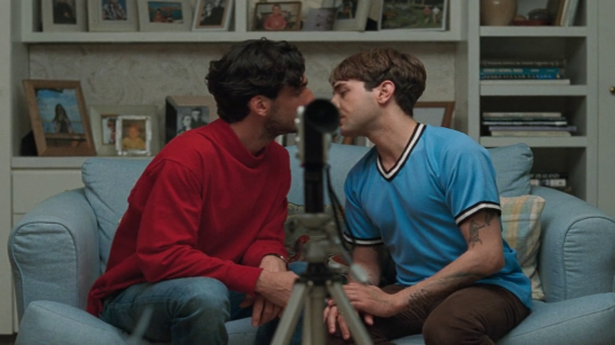 Canadian filmmaker Xavier Dolan’s quietly-beautiful portrait of two friends with conflicting sexual identities, may not be as punching as his previous works. It is, nevertheless, an affecting watch

Music fills in the most tender moments of Matthias & Maxime; surfaces to fill in the silences and to communicate complex emotions; acts as a window to peep into the minds of the primary characters and gauge their temperament. When they are at their loneliest, it is the soundtrack that kisses them with comfort and warmth. Xavier Dolan’s choice of music at appropriate intervals is as tender as the film’s theme: sexual orientation.

How does one conform to their sexual identity? Sure, it is an abstract feeling that you develop and nurture over a period. But how does one discover and submit to that inward feeling? You could pretend to live the life of a heterosexual man, convinced of your orientation until an opportunity presents itself — “Apart from the beard and all that masculine bulls***, who really knows what is under?” says a character in Matthias & Maxime, and how true.

In some cases, this feeling could blossom from a touch, a gaze, or from mere physical attraction. Or from a kiss, like the one shared by the protagonists of Matthias & Maxime (played by Gabriel D’Almeida and Xavier Dolan) who consent to make out for a short film, which is both “impressionistic and expressionistic” at the same time, like their conflicting sexual identities. What is all the fuss? It is just a kiss, after all. Not that it is their first, anyway. “Remember the one time we kissed in high school,” asks Max to Matt, who cuts him off without denying the charges.

Even though Dolan prepares you for the supposedly “big” moment in the film, he resists showing their intimacy for display, cautiously avoiding a voyeuristic gaze; it is a fleeting moment which passes like daisies kissing, but the feelings it leaves on the two seemingly-heterosexual men are deep. He does not show the kiss. Instead, the scene is cut to Matt taking a swim in the nearby lake, drowning himself in a pool of self-doubt. But only we know that he is swimming against something that is far more internal. It is a masterstroke by the filmmaker.

Both Matt and Max appear to be metrosexuals at first and the former, in fact, has a girlfriend. They know each other in and out and share a dynamic very similar to Dany and Karl from the ‘Striking Vipers’ episode from Black Mirrors. There, we saw two heterosexual men developing attraction for one another, albeit over a VR game. But the series never really cared to explore what this feeling meant and how it affects their personal lives. That is precisely what Xavier Dolan has focussed on in Matthias & Maxime, blurring the conventional lines of male friendship.

They bottle up emotion, further leading to anger and angst. We see their minds constantly oscillating between what the heart wants and what the mind rejects — most of which is seen through Matt’s point of view. Instead of confronting his newfound feelings for Max, Matt represses them altogether. The more he does, the more it destroys him. It is Max who escapes unscathed, for, he seems to be the one unaffected by the kiss, for the most part.

Dolan’s characters, in essence, are volatile and we never know when they would let loose the rage they have built within. There is a reason for their anger; it stems from poor economic conditions and sometimes, from sheer helplessness. Like his previous films, there is a tendency to vilify the mother character (played by Anne Dorval yet again). Here too, Dolan shares a cold, abusive relationship with the mother, but unlike his I Killed My Mother or Mommy, the presence of Dorval’s character hardly makes sense, let alone being effective. Her character as a divorced, foul-mouthed, self-loathing junkie has little to no relevance in the film.

In a way, you could argue that Max and his mother are an extension of the characters Dolan and Dorval played in the filmmaker’s semi-autobiographical work, I Killed My Mother. Only this time, he shows commendable control as an actor, more than a filmmaker. Equally at ease is Gabriel who gives a competent performance as Matt, especially in the scene where he gives a super-awkward farewell speech for Max. You could literally see the extension of his mind, in that scene.

Matthias & Maxime does not go beyond what it quietly establishes in the initial portions. Which is why when the film redeems itself towards the end, you are unsure whether to cheer for the characters’ triumph or to wonder aloud at what lies ahead.

“Sometimes you spend your life doing one thing and in the end, you realise it wasn’t your thing,” remarks a character. Perhaps, in some cases, the road to self-discovery is worth more than the actual discovery.