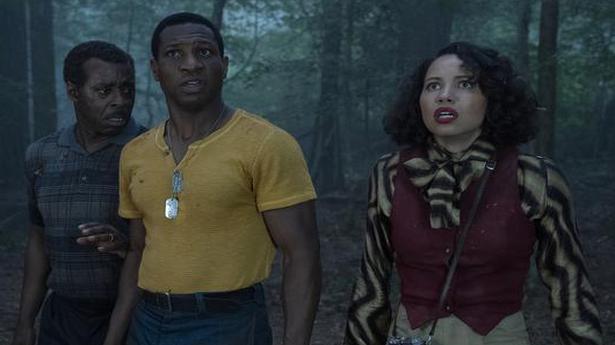 The series, whose producers include Jordon Peele and JJ Abrams, uses pulp fiction to explore deeper questions of race, gender and sexuality

From the opening shots of aliens, spaceships and monsters from the fertile imagination of Korean War veteran Atticus Freeman (Jonathan Majors), Lovecraft Country fixes you with its glittering eye. It is the 1950s and Atticus, a black man, returns home to a mysterious letter from his abusive father Montrose (Michael K. Williams), who is missing.

Montrose has apparently gone to Ardham, Massachusetts to find details about Atticus’ mother’s family. Atticus, his friend Letitia (Jurnee Smollett) and his uncle George (Courtney B. Vance) set off on a road trip in Woody, the trusted family car to find Montrose and the family legacy. The road trip becomes a gateway to all sorts of horrors from slimy, many-toothed monsters to restless, vengeful spirits. There is also the horror of systemic racism from slavery and segregation to casual murders, lynching and unspeakable experiments on black people.

Lovecraft Country, whose producers include Jordon Peele (Get Out, Us) and JJ Abrams, uses pulp fiction to explore deeper questions of race, gender and sexuality. Though accused of perpetuating stereotypes, the gloriously gory Lovecraft Country, is a thoroughly entertaining ride through brightly coloured genres of pulp fiction from sci-fi to horror.

The American writer HP Lovecraft (1890-1937) is considered the father of modern horror and was also deeply racist. Lovecraft Country based on Matt Ruff’s eponymous book, takes Lovecraftian horrors and upends them by making black people the centre of the stories.

While Atticus discovers his legacy and connection with a secret society of wizards called the sons of Adam, his aunt, Hippolyta (Aunjanue Ellis), George’s wife, goes on a trip of her own through a multiverse where she can call herself anything and be anyone.

Letitia buys a house (unfortunately haunted by sinister Dr Hiram Ipstien’s horrific experiments) in the hope of creating a safe refuge for black people in need. Her half-sister, Ruby (Wunmi Mosaku) is seduced by a white man, William (Jordan Patrick Smith), who promises her a potion that will turn her into a white woman. While Ruby enjoys the power of being white, she realises it only makes her angrier. There is also Christina Braithwhite (Abbey Lee), the only white woman in the Sons of Adam, who chafes against being kept out of the order.

Diana (Jada Harris), Hippolyta and George’s daughter, draws sci-fi comics and when she is haunted by malevolent spirits, Topsy and Bopsy, it is up to the family to get rid of the spell. Ji-Ah (Jamie Chung) a Korean nurse who has a relationship with Atticus also has a secret. Abused by her stepfather, she is possessed by the Kumiho, a nine-tailed spirit. She has to kill 100 men before she can become human again. After killing 99, she meets and falls in love with Atticus but when Atticus sees her Kumiho form (it is truly hideous with tentacle-like tails coming out of all orifices) when they are having sex, he leaves her.