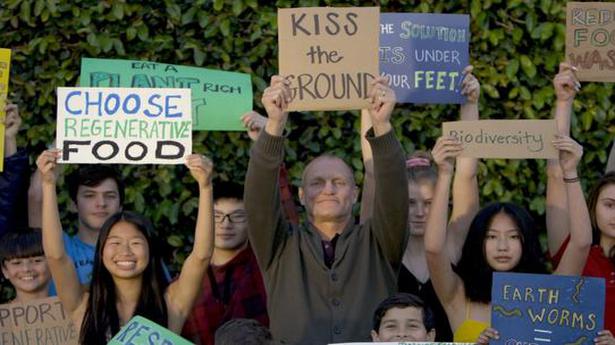 The documentary tracks success stories of reversing desertification, and uses stunning visuals and logic to show us what we can do to heal our planet

There is something immensely satisfying about growing your own food. The joy of seeing plump, purple aubergines shyly peeking from a green cap is enough to warm the cockles of the coldest heart. So, imagine the joy of seeing our favourite zombie hunter, Woody Harrelson, swap those Twinkies for sustainable agriculture practices!

We have all heard of the horrors of global warming, the melting glaciers, the poor, poor mama whale keening for her calf that died because of the toxins in the sea. Kiss the Ground gives us hope by saying it can all be reversed by just tending to the soil. Get the worms, the microbes and the carbon in the soil and you can even get rid of 1000 gigaton legacy load of carbon. The takeaway from the documentary is if we heal the soil, we can heal the planet. It is as simple as that.

Joshua Tickell, who has also written a book on the topic (Kiss the Ground: How the Food You Eat Can Reverse Climate Change, Heal Your Body & Ultimately Save Our World) directs the documentary with Rebecca Harrell Tickell. According to the documentary, healing the earth will happen once we stop tilling the land (the most intrusive thing in modern agriculture, according to Conservation Agronomist, Ray Archuleta) and using chemical pesticides. Instead of feedlots and growing one kind of crop, letting cattle graze and growing different crops also helps regenerate the land.

The film tracks success stories of reversing desertification. Gabe Brown, a regenerative rancher, shows the stark contrast between his lush, green lands and his neighbour’s fallow fields. Carbon is revealed to be the good guy in the words of John Wick (nothing to do with the dog-loving hitman), Co-Founder of Marin Carbon Project. Bio-sequestration, the process of capturing and storing carbon in plants is the way to go. If the carbon goes through the plant, then the soil would be rich with microbes and squiggly worms — all contributing to the circle of life.

Experts, including Stéphane Le Foll, the French Minister of Agriculture; and Allan Savory, Founder of Holistic Management and celebrities such as supermodel and U.N. Goodwill Ambassador Gisele Bündchen, her husband, NFL quarterback Tom Brady, and actors Patricia and David Arquette weigh in on the side of sustainable agriculture practices.

The film is fun as it is not preachy. Rather, it uses stunning visuals and logic to show us what we can do to heal our planet. Excuse me while I kiss the ground…

Kiss The Ground is currently streaming on Netflix