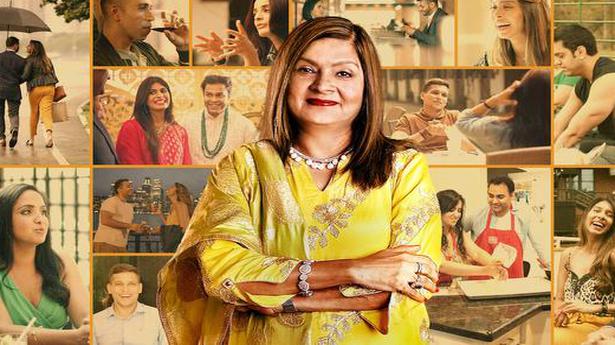 Under a glossy look, Netflix’s latest original show peddles some atavistic ideals of marriage and tradition

A couple of episodes into Netflix’s latest original show, Indian Matchmaking, I was convinced that it was a satire or parody of crazy rich desis fantasising over weddings and finding a life partner through a neighbourhood aunty. But more episodes in, the docu-series-cum-reality-show continues to take itself seriously, at points frustratingly so, advocating for some archaic ideas of marriage, while white-washing all inherent flaws. What could have been ironically fun and an enjoyable archetype of trashy television, begins to feed into the various stereotypes, and borders on being didactic. The characters say and believe in some of the most atavistic ideals of marriage, and the show, in its glossy demeanour, endorses it.

The high level of cringe is not even the worst aspect of the show. Created in the US, the series follows a Mumbai-based matchmaker Sima Taparia (“I’m Sima from Mumbai,” she introduces herself to every new client), who flies between India and the US, bringing upper-class and upper-caste singles together. We see her several clients in various parts of the States and three in Mumbai. Parental pressure, issues of compatibility, love vs. career, ageing and past relationships are a few recurring themes. Terms like ‘adjustment’, ‘compatibility’, ‘good nature’, ‘compromise’ and ‘traditional’ are thrown around in abundance. In one of the episodes, the show highlights some faux feminist ideas of ‘modern’ woman and ‘liberation’ and low-key endorses classist and casteist behaviour, and discrimination disguised as ‘preference’.

It’s interesting to see that the Indian diaspora and upper-class Mumbai share similar pressures, expectations and value systems. Or so the show tells us. While capturing Mumbai, the series — as expected — has an exotic gaze, almost making the city and its inhabitants unrecognisable. It’s shot like a person from the West capturing Mumbai from the airport to their fancy hotel. While the creators may argue that the format and content are meant for fluffy entertainment, it is hard to overlook the latent messaging and mainstreaming of problematic conservatism.

Even in the ‘entertainment’ department, barring a few snide remarks in the first three episodes and unintentional humour, the structure of the show meanders and arbitrarily includes and excludes its subjects. The series has picked protagonists who are naturally fascinating and some frustrating, but the telling is haphazard and scattered, lending Indian Matchmaking a distracted tone.

Sima, the narrator of Indian Matchmaking, is the purpose of this series. She embodies a long-standing tradition of older relatives finding a suitable spouse for an eligible bachelor or spinster. Although her clients call her ‘Aunty’ (even the Indian diaspora youth), she is a professional who charges a fee for her services. Although she occupies centre stage and one would be very curious to know her fees, the series never reveals it, and one is kept wondering how she flies around the world setting people up. As compared to her Delhi-based colleague, Geeta, she is more traditional and subscribes to astrology, face-reading and the age-old ideology that marriage is between two families.

The series tells you that the wedding industry in India is ginormous, and fairly clinical in the way two people decide to get married. We see couples who have stuck around together for decades, and the series tries hard to demonstrate that ‘arranged marriage’ may not be a bad idea after all. There are moments when the show makes some pertinent observations about desire and companionship among millennials, but those are fleeting. Under all the gloss, fluff, and mush, the series panders to the age-old stereotypes of Indian weddings, customs, and traditions, which may not be untrue, but are surely incomplete.