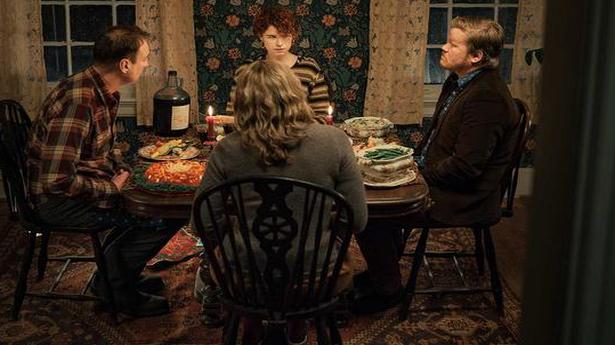 The writer-director, who has also written the screenplay based on Canadian author Iain Reid’s eponymous debut novel, has created a thing of beauty, which is a joy and an anxiety forever

A road trip is many things in a movie, but hardly ever a thought experiment. In Charlie Kaufman’s surreal I’m Thinking of Ending Things, a young woman goes on a road trip with her boyfriend, Jake, to meet his parents on a remote farm. While there is tension building up to terror and thrills aplenty, there is also conversation between the two which flits from quantum physics and Shakespeare to Wordsworth’s Ode: Intimations of Immortality and “Newton’s first law of emotion.”

The young woman (she is called by many names through the film) carries on an interior monologue even as she talks to Jake on the long drive through a cold bleak countryside. She is a poet and a painter and performs one of her morbid poems (“you sigh into the onslaught of identical days”) for Jake in a bid to pass the time. There is a discussion on movies, which the girl calls a “societal malady”, on road trips, which Jake says are “good to remind yourself the world is larger than the inside of your own head”, and on words such as wow which the girl describes as “an all-purpose exclamation”.

Shakespeare runs like a brilliant skein through the sparkling screenplay—from “Ill met by moonlight” (A Midsummer’s Night’s Dream) and Hamlet’s thoughts on infinite space in a nutshell to his dissertation seeming and being.

When the couple finally reach Jake’s parents’ farm, there are many things that unsettle the girl including a picture of Jake as a child which the girl feels is her picture and a book with her poem printed on it. There is a boarded-up basement door, a story of maggoty pigs, lambs frozen to death, a dog named Jimmy and anonymous voices speaking of the one question to be answered.

Time and space bend to crush the real, the unreal and surreal into one long and narrow band which is “beautiful in a bleak, heartbroken way.” At the edges of the band are frozen ice-cream queens, a janitor in a deserted high school and all manner of unsaid worries and anxieties.

Kaufman, who has also written the screenplay based on Canadian author Iain Reid’s eponymous debut novel, has created a thing of beauty, which is a joy and an anxiety forever. While the movie does not follow the novel to its harrowing ending, Reid has been quoted as saying the ending is open to interpretation and every one of them is valid.

The acting is top notch from Jessie Buckley (the girl) and Jesse Plemons (Jake) to Toni Collette and David Thewlis as Jake’s strange and sorry parents. As we watch the girl’s increasing agitation in the car, we can empathise with her isolation even though we might not agree with her when she says, “Everything wants to live, viruses are just one more example of everything.”

I’m Thinking of Ending Things is currently streaming on Netflix