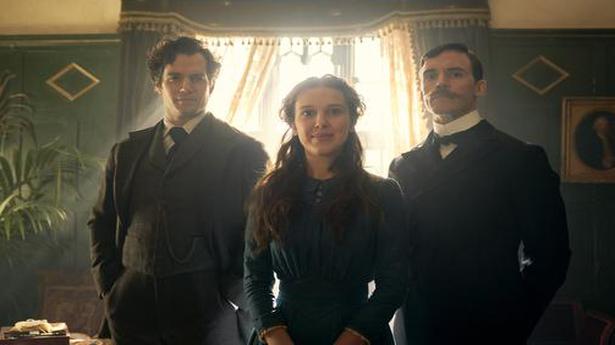 The central mystery does not call for mind-blowing detective skills nor is there a sense of real danger, but makes for passable viewing

Jack Thorne, who did such a marvellous job of adapting Philip Pullman’s His Dark Materials for HBO, is the writer for this high-profile adaptation of Nancy Springer’s Enola Holmes mysteries. Enola is the teenage sister of the much-older Holmes boys—Sherlock is already famous and Mycroft is a stick in the mud.

When her mother goes missing, leaving behind a string of clues, Enola decides to go to London to look for her. That Mycroft is planning to send Enola off to a grim finishing school for young ladies offers an added incentive to get away. En route she meets young Lord Viscount Tewksbury who has an interest in plants and is also on the run.

Many disguises, crashes and bangs later, Enola solves the mystery, finds her mum and all ends happily ever after. Handsomely produced, though London and the countryside look suspiciously clean and green, Enola Holmes is mildly engaging. The central mystery does not call for mind-blowing detective skills nor is there a sense of real danger.

Millie Bobby Brown (Eleven from Stranger Things) is charming as Enola in full Victorian bonnet and corset, even though her habit of talking endlessly to the camera is twee at first and rapidly becomes annoying. Henry Cavill as Sherlock looks mildly irritated at the proceedings—he looks like he would rather be at the Fortress of Solitude or a hot tub at the very least. Sam Claflin as Mycroft does his best stuffed-shirt imitation while Helena Bonham Carter as the Holmes mater makes a strong presence of her absence. There is no Watson, but there is a Lestrade (Adeel Akhtar) bumbling away.

Young Wallander presents Henning Mankell’s dour sleuth’s first case, Perry Mason looks at the lawyer’s life before he ruled the courtrooms and Ratched presents an origin story to the evil nurse who made poor Billy’s life a living hell in One Flew Over the Cuckoo’s Nest. Maybe in these unsettling times, origin stories help us make sense of arbitrariness. Enola Holmes is not an origin story (that would be Barry Levinson’s Young Sherlock Holmes). Rather, it is a “what-if” exercise and works if one does not expect too much from it.