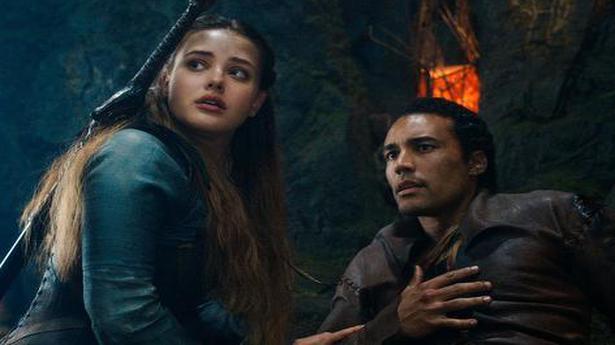 Katherine Langford’s new show also ticks the boxes with its inclusive representation in casting and sexuality, and sets up an intriguing second season

If you don’t allow reason to cloud your judgement, Cursed is an enjoyable show with good looking leads, strong performances, loads of magic, stirring battles and teeth-gnashing villains in fancy dress. This high fantasy YA drama, based on Frank Miller and Tom Wheeler’s 2019 eponymous illustrated novel, places Nimue from Arthurian legend at the centre of action.

A young woman, Nimue, is hated and feared in her village because of her magical powers. The church, led by wicked Father Carden, is terrorising the countryside as he has decided it is his holy duty to rid the world of the fey, or magical folk. He and his feared red paladins go from village to village killing the fey and torching their homes.

When the paladins come calling to Nimue’s village, all hell breaks loose. Nimue’s dying mother tasks her with reaching an ancient, powerful sword to the magician Merlin, the advisor to the king, Uther Pendragon. Thus begins Nimue’s quest for Merlin dodging the scary Weeping Monk with a little help from a charming mercenary, Arthur.

Nimue’s best friend, Pym, joins the northern raiders. There is a struggle for power between Uther, Cumber the ice king, and the church. Everyone is scrabbling for the sword of power, which Nimue wants to use as a bargaining chip while Merlin wants to destroy it.

While the leaps in time and place are annoying — if it is the Dark Ages, knights are anachronistic as is mention of Charlemagne, it can be forgiven by forsaking logic. Anyway fie on anyone looking for historical accuracy in high fantasy.

So when Merlin talks of pigeon blood rubies from Mughal Mountains, it is foolish to wonder if he means Golconda… It is Mary Stewart’s excellent Merlin trilogy, which combined history and fantasy that has spoilt us. The books—The Crystal Cave (1970), The Hollow Hills (1973) and The Last Enchantment (1979) were set in fifth century Britain and told Arthur’s story from Merlin’s perspective.

Arthurian legends were never meant to be historical record—it is only in Stewart’s hands that they turned into a heady concoction of myth and history. From Geoffrey of Monmouth’s History of the Kings of Britain, to Thomas Malory’s Le Morte d’Arthur and Alfred Tennyson’s Idylls of the King, Arthur’s story has been retold many times to echo the concerns of the age. In that way Cursed ticks the boxes with its inclusive representation in casting and sexuality. And violence, religious intolerance and the subjugation of indigenous people will never be dated.

So one should not begrudge the modern idiom the characters use in Cursed or the deliberate vagueness of space and time. A young person’s quest to meet their destiny with generous helpings of love, magic, war, grief, loss and betrayal is as timeless as it is appealing.

To get down to the bare bones of Cursed, the plotting is fairly tight with lots of strands left to be picked up in Season 2. The scene changes are breathtaking and remind one of its graphic novel roots. The acting is competent with special mention for Katherine Langford’s Nimue. The 13 Reasons Why star makes for an appealing, wilful girl turned powerful sorceress and leader. Devon Terrell makes for a pleasing Arthur, while Gustaf Skarsgård brings wily, vulnerable Merlin to life. Sebastian Armesto as Uther, mixes royalty with a certain weasely quality. Billy Jenkins is cherubic as Squirrel/Percival, while Emily Coates’ angelic-looking Sister Iris hides a black heart.

Unfortunately, animals meet sticky ends from horses burning to bears having their skulls crushed and wolves being decapitated. A word on the subtitling — horses do not bray, they neigh. Arthur’s introduction as a bard reminds one of The Witcher’s bard, Jaskier, as well as Blackadder’s virulent dislike for “hey nonny nonny!” One cannot talk of King Arthur and ignore Monty Python’s hilarious Monty Python and the Holy Grail as well as John Boorman’s sprawling R-Rated epic Excalibur (1981), with Liam Neeson as Gawain and Helen Mirren as Morgana.

While all the major players of Arthurian legend have made their appearance, Excalibur is not mentioned by name even though the 10 episodes speak of the sword of power. Maybe all that and more have been saved for season 2.

Cursed is currently streaming on Netflix