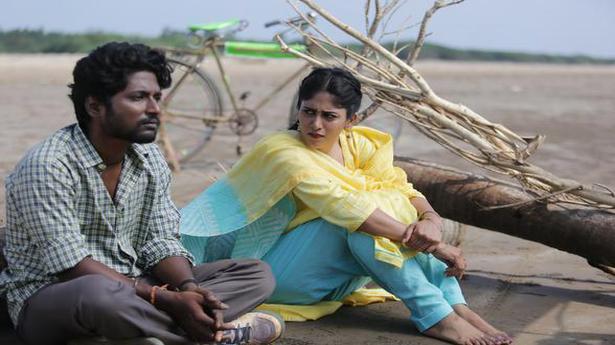 Director Sandeep Raj goes against the norms of masala-laden Telugu cinema, helped by a terrific performance by Suhas

‘It’s 1999 and people still discriminate based on skin colour and caste,’ rues Jayakrishna (Suhas) in Colour Photo, now streaming on Aha. Oh well, in 2020 we still need the hashtag ‘Black Lives Matter’ and skin lightening creams continue to have many takers.

Colour Photo, with its story by Sai Rajesh and screenplay, direction by debutant Sandeep Raj is a film about a dark-skinned underdog, made by a group of underdogs who have worked their way into the Telugu film industry after winning over viewers with their short films. The leads Suhas and Chandini Chowdary, the supporting cast that includes Viva Harsha and Srividya Palaparthi, and Sandeep himself are familiar names to those who’ve been attuned to Telugu content on YouTube.

Almost similar to their journey in shorts, where they began with comedies and moved to other genres, Colour Photo has its share of laughs when it takes us into Machilipatnam of the late 1990s, and then reveals its true, deeper colours.

Jayakrishna is the son of a milk man, and a mechanical engineering student. He is sincere, works hard, can be described as average in academics, is an introvert, and wants to lead a life of dignity. He knows that education is his passport to better means of livelihood and recognition in society. He falls in love with the comparatively well off and fair-skinned Deepti (Chandini), whose cop brother Ramaraju (Sunil) is a vily moral police officer.

It’s a familiar terrain, but the narrative makes all the difference. When Jayakrishna first sees Deepti, she is dressed as a goddess and rehearsing for a dance performance. His admiration for her is reverential, more than youthful attraction. He is aware that he’s no match to her. She makes the first move and the romance blooms slowly; Jayakrishna stays guarded knowing that the journey wouldn’t be easy.

Sandeep establishes the characters and their bonds beautifully — be it the segment in San Francisco between a couple and the happenings at a funeral soon after (this deserves a discussion, but let’s keep it spoiler free for now), or the friends in the engineering college. The writing gives enough room for the supporting characters to flourish. Divya Sripada and Viva Harsha as the friends, and Srividya as Deepti’s sister in law have definitive character arcs and come up with good performances.

Apart from skin colour and class, the film talks about gender viewpoints. Take for instance when one woman tells another that the heartbreaks of women never get told on screen because it’s the men who are making movies. Men can seek refuge in alcohol like Devdas, but women are married off even before they can mend their broken hearts.

The casual racism that arises in the garb of humour is also addressed. Black and white photo, gulab jamun and rasgulla are among the many terms to take a jibe at couples of different skin colours. And more than once there’s an image of lord Krishna in the backdrop, to highlight the ironical plight of those like Jayakrishna in a country that worships dark-skinned Gods.

There are interesting segments like the fight between team British and Vanarasena in college, and the speech that Jayakrishna gives in the presence of a light-skinned foreigner. There’s also the dichotomy of Ramaraju who is also dark skinned but loathes Jayakrishna.

As the film takes on a melodramatic hue, a few scenes reminded me of Pariyerum Perumal and Asuran (Tamil) and maybe it’s Sandeep way of doffing his hat to these filmmakers as much as he celebrates the masala-laden 90s ruled by Chiranjeevi, Nagarjuna and Venkatesh. I was also reminded of 96 (Jaanu in Telugu) when one character hypothetically changes the narrative. If only things had happened that way!

Colour Photo is hard-hitting and emotionally moving, but it could have been shorter. I also wish it hadn’t spelled out too much and left the audience to interpret things for themselves.

However, these are just niggles. Colour Photo has a lot going for it, including the reason for the title. Even the small portion where Jayakrishna’s father shares his own story adds depth to the characters and their fight for dignity.

Leading from the front is Suhas, with a performance that comes from the heart. He is a powerhouse of talent, just like actor Priyadarshi, with an ability to move like a chameleon between comic roles and emotionally moving characters. Chandini does well as the woman of privilege who is also sensitive and empathetic. A restrained and effective performance also comes in from Aadarsh Balakrishna. Sunil is all menace and boy, he makes you hate that venom.

The production design and cinematography deserve a mention, and most importantly music composer Kala Bhairava for an evocative background score that has an endearing old world charm.

Colour Photo requires a patient viewing, given its deliberate slow pace. But it has plenty to root for. The team deserves a pat on the pack for going against the norms in Telugu cinema. After Mallesham and Uma Maheswara Ugra Roopasya, this is another film that celebrates the average, common man as a hero. That’s a good thing.