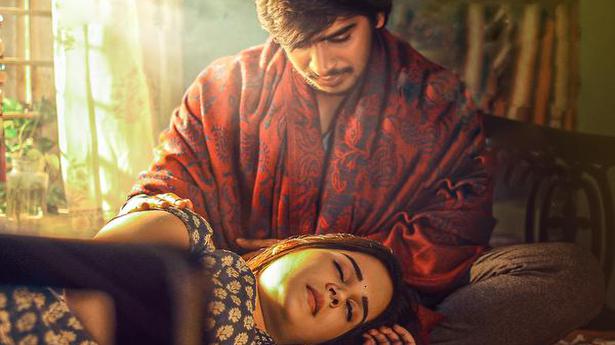 A little girl asks her dad Arun Prasad (Srikanth Iyengar) to tell her a story. He outlines the story of Kanva maharishi who raised Shakuntala with much love and reluctantly let her go with Dushyant. The girl equates this with the bond she shares with her father and asks if she, too, will be sent away after marriage. The first few scenes establish the father-daughter bond. Arun obsesses over his daughter and her life revolves around him, a tad reminiscent of Abhiyum Naanum (Akasamantha in Telugu).

The possessive father and doting daughter trope is a familiar one. Director Edward Jonathan revisits this in Amaram Akhilam Prema, the Telugu film now streaming on Aha. The film doesn’t aim too high and earnestly delivers what it sets out to do — put forth a story of relationships and egos, and why love is also about letting go.

Akhila (Shivshakti Sachdeva) is unwavering in studying for civil services and like in many mainstream films, meets Amar (Vijay Ram) who uses a book as a pillow and hates helping his dad (V K Naresh) at the family-owned bookstore (the good old store The Bookpoint at Himayatnagar, Hyderabad, gets some mileage).

Amar trails Akhila until she’s tired of spotting him everywhere. He even enters her home in the guise of fixing the cable. Before you can mention stalking, the narrative presents a bunch of instances to show that Amar isn’t a creep.

The film plods along, neither too drab nor too impressive, but now and then shining thanks to Radhan’s music. When the backstory of why Akhila is staying away from her dad’s house and trying to score in civil services is revealed, the film lays bare the conflict areas and why she looks to redeem herself in the eyes of her father.

The later part of the film shows Amar turning mature and knowing where and when to withdraw from Akhila. The transformation of a wastrel to a responsible guy isn’t dramatic; it happens gradually. In fact, it’s the characterisation — of Amar, Akhila and especially Arun — that makes the film watchable.

However, the later portions turn melodramatic and predictably boring. At one point, the most sensible person is veteran actor Annapurna who tries to knock sense into Arun and Akhila. If these characters just sat down and had a heart-to-heart chat, things would have eased up much earlier.

Amaram Akhilam Prema needed much better performances from the lead actors. The ones who stand out are Srikanth Iyengar and V K Naresh in his limited role. Srikanth has the knack of delivering believable performances and he does again effortlessly, playing the possessive and ego-driven father effectively.

(The film streams on Aha)