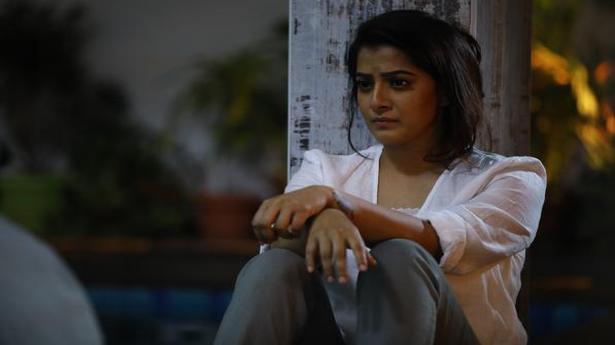 The first poster of Telugu web series Addham (mirror) piqued curiosity. The three-episode series that now streams on Aha was written and filmed during lockdown, and is the handiwork of a cast and crew that predominantly works in Tamil cinema.

Are the sensibilities going to be different? During the months of lockdown and thereafter, with more viewers having warmed up to content in different languages more than ever before, it’s probably the right time to present some new perspectives and shake things up a bit.

Addham ventures beyond the realm of romance, comedy and crime dramas that have dotted the landscape of Telugu content in the OTT space until now. Three stories connected by the theme ‘Morality is a shifting goalpost’ presents characters that are forced to look inwards, introspect on what’s morally right in a given situation, and in the process, heal old wounds.

‘The Road That Never Ends’ turned out to be the most gripping, and a tad disturbing, among the three stories. It begins like a story that’s going to let us into the lives of those who live in the fringes of urban precincts. The camera captures the unsteady rhythm with which a lorry driver (Jayaprakash) navigates the highway at night, sometimes gazing away from the road in front. Nope, a crash on the highway is not where this story is headed. It brings in a new character, an adolescent boy (Praveen) who is running away from home after failing to clear his exams.

The road trip takes a tragic turn and the teenager is privy to the grief of the driver’s wife (Rohini). Rohini takes over from the moment she arrives on screen and it’s through her character that we are jolted into a deeper understanding of the lorry driver’s life. Does morality lie in standing up for the greater good, beyond personal loss? Director Sarjun brings to life the story, written by Siva Ananth, with dexterity, urging us to reflect.

Addham also attempts to make us contemplate over what we see on screen, long after the title credits roll.

Siva Ananth directs the story ‘The Unwhisperable Secret’ in which Dr Shruti (Varalaxmi Sarathkumar), a mental health professional, listens in as Ram (Kishore) recaps an incident that has left him with scars of guilt. Something stirs in the visibly poised Shruti. The interaction opens up old wounds. Varalaxmi, whom we have seen in mainstream Tamil and Telugu cinema often as the heady, cocky woman of power, comes up with a restrained performance that mirrors her inner conflicts and duality. Does she stand up for what she believes is right? What if she begins to look at things differently and that heals her, before she can heal someone else?

To its merit, Addham doesn’t spoon feed the audience. It trusts us to read between the lines, and that’s a welcome change from the usual narratives.

Perhaps the weakest story among the three is ‘Crossroads’, featuring Prasanna, Pavitrah Marimuthu and Abirami Venkatachalam, directed by Barath Neelakantan. At the crossroads of a personal relationship, Prasanna finds an unlikely glimmer of hope through a chance encounter, and ideally, we should be rooting for them.

However, there’s not enough that is revealed about the lives of the three principal characters. We don’t know the story of the bickering wife; what equation did Prasanna share with her and when did their relationship sour? In the given circumstance, the new development seems to be the way out. But I was left with questions. Given the more complex questions of morality in the other stories, Crossroads somehow didn’t measure up. Prasanna is dependable, as always, but this story could have been fleshed out better.

The ideas explored in Addham are universal, beyond region and language barriers. It’s not a perfect, bravura series but definitely worth delving into. Shelley’s cinematography and Sundara Murthy’s thematic music score, along with the performances, help the web-series. The standout performance comes from Rohini. In barely a few minutes, she makes everything look believable, and deeply moving.

Addham is currently streaming on Aha