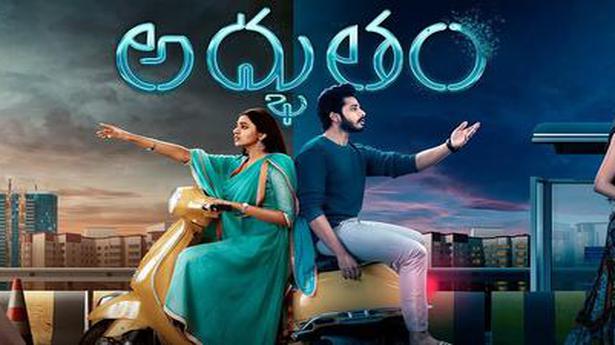 A grandmother’s (played by Tulasi) reference to Ramayana helps one of the lead characters draw a parallel to a strange turn of events in her life. Later in the story, the grandmother urges her granddaughter Vennela (debutante Shivani Rajasekhar) not to try to change destiny. The mythological reference to underline the divine intervention does not come as a surprise, since the story is by Prasanth Varma (director of Awe and Zombie Reddy), who has used it as a plot device in his earlier work too.

Adbhutham, directed by Mallik Ram, was supposed to introduce erstwhile child actor Teja Sajja as a hero. The much-delayed film now streaming on Disney+ Hotstar has well known members in its crew — writer Lakshmi Bhupala, editor Garry B H, music director Radhan and cinematographer Vidyasagar Chinta — who have since gone on to establish themselves with other projects. Teja, meanwhile, acted in Oh! Baby, Zombie Reddy and Ishq.

Adbhutham begins on a science fiction premise and then attempts to be a romance, comedy and family drama rolled into one. The result is far from satisfactory. Surya (Teja Sajja) is a failed musician who grapples with personal loss and finds no happiness in his job as a newsreader; he decides to end his life. In a bid to leave a note, he sends an sms to his own number, and is shocked when he gets a response. At the other end is Vennela, who is also about to end her life, unable to clear her exams to pursue higher studies and not wanting to get married at the insistence of her father.

After an exchange of angry, frustrated messages the characters realise that they share the same mobile number and that they both live in Hyderabad though they are five years apart — he in 2019 and she in 2014. The change in sky colour is attributed to solar flare, and it is said that magnetic field anomalies have led to two people speaking over the same number, albeit, from different time periods.

The contrast begins with the character names — Surya and Vennela — to later showing them facing opposite weather conditions in Hyderabad and the bond they share with their respective fathers — as though to assert that the twain shall never meet. But… you never know. This is a mainstream Telugu film where science fiction is leveraged for some good laughs. Actor Satya’s presence as the hero’s friend guarantees this. In one sequence, the duo helps Vennela by sourcing a five-year-old question paper. And there’s also a dialogue about Satya trying to call his own number to see if he, too, will find a girl from the past.

The film is also aware of its predecessors in science fiction and references Singeetam Srinivasda Rao’s Aditya 369 and Vikram Kumar’s 24. The possibility of a character from the past connecting with someone from the present has also been explored in other films — the 2021 Telugu film Play Back and the 2006 English film The Lake House, which was in turn adapted from the 2000 South Korean film Il Mare.

After establishing the premise, Adbhutham finds itself on shaky terrain. While Surya’s story of setbacks in his musical journey and his relationship with his father (Sivaji Raja) is narrated decently enough to draw empathy, Vennela’s travails with a suitor do not evoke the laughs they are supposed to.

A story such as this would have benefitted with a tighter screenplay and better performances. As newcomers, Teja and Shivani have good screen presence and come up with reasonable performances, but there are times it doesn’t feel good enough. The music is also a letdown; we have heard much better tunes from Radhan.

As the story progresses, the attempts to race against time across the two periods to change the course of crucial events get messier. The twists and turns keep coming but it turns out to be a test of patience. Satya remarks jovially at one point that this is the most complicated, unrealistic and hypothetical love story of the century. That describes the progression of this story too.

‘Chhorii’ review: The bitter side of sugarcane 2 min read

‘Chhorii’ review: The bitter side of sugarcane

‘Encanto’ movie review: No sign of Disney magic wearing off

‘Kaaval’ movie review: A tired rework of an old formula

‘Anubhavinchu Raja’ movie review: Nothing redeeming about this one 3 min read

‘Anubhavinchu Raja’ movie review: Nothing redeeming about this one