Anushka Sharma and Virat Kohli enjoy massive fan following on social media and every move of the couple is shipped by fans! Keeping a keen eye on the celebs, a fan recently spotted that Virat was wearing an iconic Cartier bracelet, similar to which is owned by his wife Anushka Sharma! 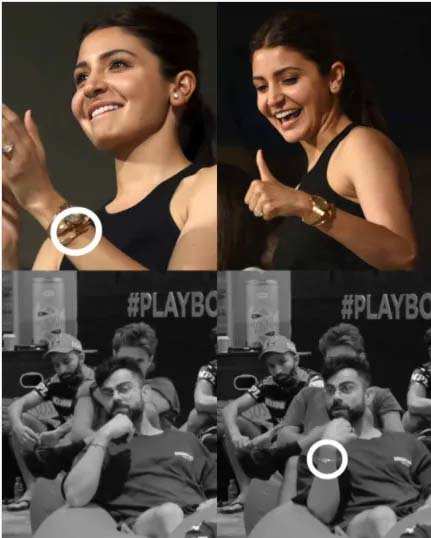 A recent picture of Anushka and Virat had gone viral on the internet with the cricketer sporting a burp cloth on his shoulder. Attending to daddy duties, Virat Kohli was seen posing with his team members and Anuska Sharma. Previously, Anushka had shared a picture with a similar burp cloth on her shoulder and captioned it as her ‘current favourite accessory’ on Instagram.

Virat and Anushka turned parents to Vamika on January 11 this year. Introducing their daughter to the world, Anushka had shared in an Instagram post, “We have lived together with love, presence and gratitude as a way of life but this little one, Vamika has taken it to a whole new level! Tears, laughter, worry, bliss – emotions that have been experienced in a span of minutes sometimes! Sleep is elusive but our hearts are SO full.” On the work front, Anushka was last seen in ‘Zero’ which hit the screens in 2018.
Source