Kareena Kapoor Khan is currently enjoying her vacation with her husband Saif Ali Khan and their kids Taimur and Jehangir. The Khan family was also joined by Bebo’s aunt Rima Jain, cousin Armaan Jain, sister-in-law Anissa Malhotra and cousin Nitasha Nanda.
Kareena took to Instagram to share a picture of Saif walking the streets of London while carrying bags in his hand and shoulder. Well, the actor is surely performing his husband duties with ease! Dressed in a light blue t-shirt teamed with blue denim and shoes, the actor looked handsome! Kareena captioned the story, “Mr Khan is that you?” along with laughing and heart emojis. Check out the post here: 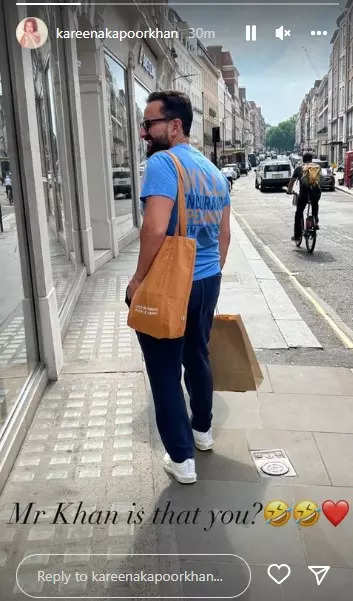 The actress took a break from work recently and chose London as her holiday destination. She was shooting for her OTT debut, a web series titled ‘The Devotion of Suspect X’. Helmed by Sujoy Ghosh, the show also stars Vijay Varma and Jaideep Ahlawat.
Apart from that, the actress is all set for the release of her upcoming film ‘Laal Singh Chaddha’ co-starring Aamir Khan. The film has been slated to release in August this year.
Saif, on the other hand, will next feature in the Hindi remake of ‘Vikram Vedha’ with Hrithik Roshan.
Source