Karan Johar has reviewed Alia Bhatt‘s upcoming film ‘Darlings’ backed by Shah Rukh Khan and Gauri Khan. The director lauded Alia for her ‘brave decision’ to co-produce the film. Calling it a five-star rated movie, the filmmaker showered praises and wrote, “A debut director so assured that she sucks you into the vortex of #Darlings like a bonafide veteran! To balance humour ( dark and conversational ) with a sensitive subject is a massive challenge in itself but the team of this nuanced noir and exceptionally solid film take it on and emerge victor victorious! So fun! So hard hitting and so engaging! All at once! @aliaabhatt @shefalishahofficial @itsvijayvarma @roshan.matthew are FANTASTIC!!! This is the best ensemble of actors I have seen in a long time! BRAVO! Take a bow Jasmeet @jasmeet_k_reen what a debut!!!! Can’t wait to see more of your work!”
Praising his ‘baby girl’ Alia, he added, “Congratulations My baby girl @aliaabhatt what a brave decision to begin your producer journey with.. may the sunshine on your content decisions eternally!”

Johar also hailed SRK and Gauri for giving a green light to the venture. He concluded by writing, “@gaurikhan @iamsrk @redchilliesent @_gauravverma take a BOW !! What a PROUD film to green light !!! May the force always be with you! So finally My darlings don’t miss #darlings on the 5th of August only on @netflix_in …..it’s a 5 star film!” 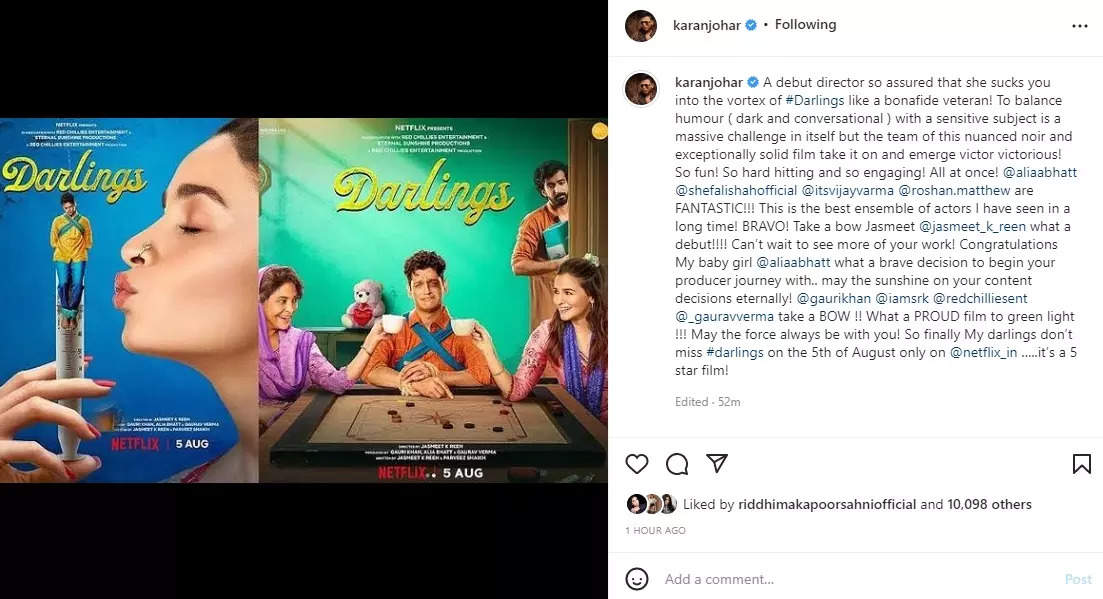 Helmed by Jasmeet, the film also stars Vijay Varma, Shefali Shah and Roshan Mathew. It will release on the OTT platform on August 05.
Source