Actress Kangana Ranaut has been busy promoting her upcoming film ‘Thalaivii’.
Recently she attended the premiere of her film in Hyderbad and revealed her disappointment with multiplexes for not screening the film due to the gap between its theatrical and OTT release. Now she took to her Instagram handle and called the film her best work.

After watching her film, she wrote, “What a gratifying experience to watch Thalaivii best film of my career so far.” She further added, “Thalaivii is a theatrical experience hopefully Hindi multiplexes will also play it. I am confident it will bring audiences back to theatres @pvrcinemas_official @inoxmovies”. 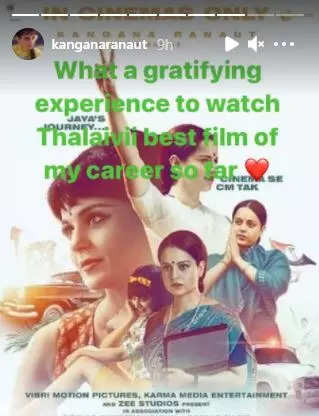 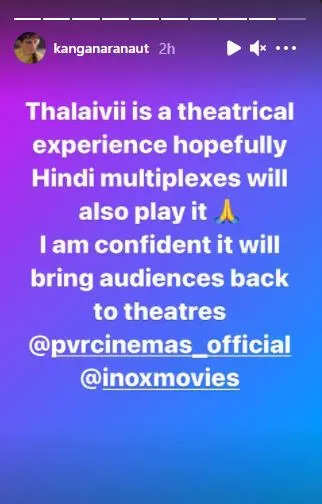 Earlier, Kangana had shared several pictures of her promotional looks from Hyderabad. The actress penned a little note which read, “#Thalaivii in Hyderabad today …. Media interactions here and watching the Hindi version of the film today in the evening for the very first time …. 💚”.

Thalaivii is all set to have a theatrical release on September 10 as announced, and the bookings for the film will open soon. Currently, theatres are allowed to operate with 50% occupancy across the country, owing to the strict rules due to the COVID-19 outbreak.