Shah Rukh Khan’s kids Aryan and Suhana Khan are undoubtedly one of the popular star kids we have on the block. Their pictures and videos go viral on social media in no time.
‘Gully Boy’ actress Shruti Chauhan, who is close to the Khan siblings, took to her Instagram stories to share a photo of them posing with their squad.

Check out the photo here: 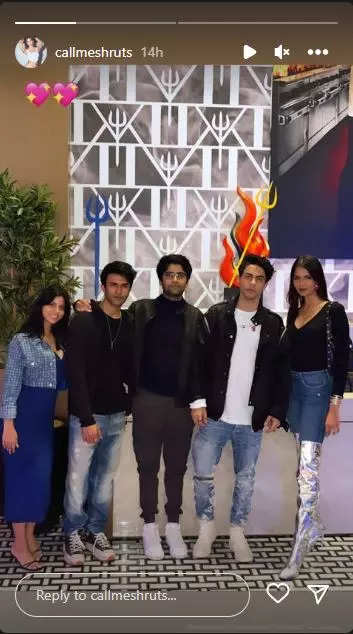 In the photo, Aryan looked dashing as ever in his white t-shirt, black jacket and blue jeans. Suhana , on the other hand, looked stylish as ever in a blue outfit which she paired with a printed blue jacket. The siblings are seen striking a pose with their friends for the camera.
Both Aryan and Suhana have been hitting the headlines for their rumoured relationships. Reports are rife that Suhana is dating her ‘The Archies’ co-star and Amitabh Bachchan’s grandson Agastya Nanda. Aryan, on the other hand, made headlines for his dating rumour with Nora Fatehi after a couple of photos emerged of them partying at the same venue in Dubai.

On the work front, Suhana will be making her big Bollywood debut with Zoya Akhtar’s ‘The Archies’ co-starring Agastya and Khushi Kapoor. Aryan is all set to make his writing and directing debut via a web series. According to reports, the shoot for the series is set to start this year and is produced by Red Chillies Entertainment. Source