Anushka Sharma took to Instagram to share pictures with husband Virat Kohli and captioned the post by adding a red heart. In the pictures, the Indian cricket team skipper can be seen embracing Anushka in his arms. Anushka looked pretty in a black loose kurta while Virat was in a black t-shirt. In one of the photos, the actress is seen kissing her hubby’s cheeks.
Soon, Priyanka Chopra, Mouni Roy and Tahira Kashyap dropped their heartwarming comments. Here take a look:
Meanwhile, Virat turned a year older on Thursday and the actress celebrated his special day with him in Dubai. Pictures and videos from the celebration have surfaced online.
Recently, Anushka made her pregnancy announcement in August and took the internet by storm. She shared a cute picture where Anushka was seen showing off her baby bump and wrote, “And then, we were three! Arriving Jan 2021 ❤️🙏” 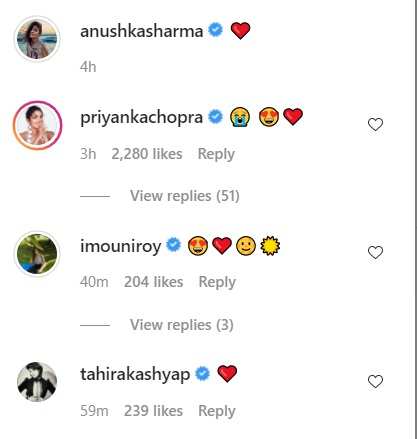 On the work front, Anushka was last seen in ‘Zero’ alongside Shah Rukh Khan and Katrina Kaif, helmed by Aanand L Rai. She is yet to announce her next project.