Alia Bhatt has been in the news lately for her dreamy wedding with Ranbir Kapoor, ‘Brahmastra‘ and her recent airport appearances as she jetted off to fulfill her various work commitments. Amidst this a video of the actress surfaced online wherein on one hand she is seen refusing to consume sugar when offered tea on a comedy show, and on the other hand she is seen endorsing sugary products. As soon as the video surfaced, netizens started trolling the actress for having double standards and also criticising Bollywood stars for endorsing products that they themselves do not use in real life. 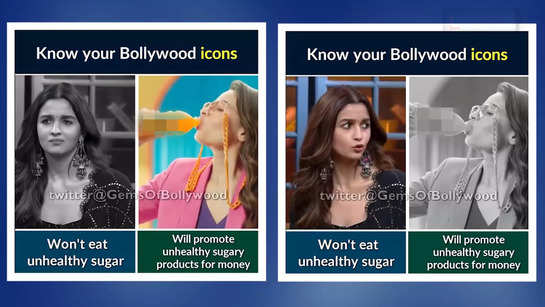 “Double standards. Not new to some of the film personalities,” commented one Twitter user. Another one wrote, “Kuch paison ke liye khud ko bechde saare stars, yeh sugar wugar ka cheez hai…” Another user wrote, ”
@aliaa08 paisa ke liye saala kuch bhi karega, that’s the motto for all bollywoodiyas.”
“Thodi to sharm kijiye Aaliyaji… Abhi bola… Abhi fok… public sab janti hain ki paisa bolta Hain… Shame of you Aaliyaji… Paisaa ke liye kuch bhi…” commented another tweeter.
On the work front, Alia was last seen in ‘RRR’. She will soon be seen opposite Ranbir Kapoor in ‘Brahmastra’. She has also wrapped up the shooting of her own production ‘Darlings’, and is currently shooting for Karan Johar’s ‘Rocky Aur Rani Ki Prem Kahani‘ with Ranveer Singh. Thereafter she will start shooting for her Hollywood debut with Gal Gadot titled ‘Heart of Stone’ which is a spy film directed by Tom Harper.