Anurag Kashyap’s daughter Aaliyah Kashyap, who is quite active on social media, has shared throwback pictures of her grandmother, Krishna Bajaj, who passed away on Thursday morning. She was Anurag’s first wife Aarti Bajaj’s mother.
Aaliyah took to her Instagram story and paid a tribute to her granny. In one of the pictures, baby Aaliyah can be seen sitting with Krishna Bajaj and smiling for the camera. While in the second picture, her grandmother can be seen holding a plate filled with diyas. Along with the picture, she put a red heart emoji and wrote, “Rest in peace beautiful soul.” Have a look: 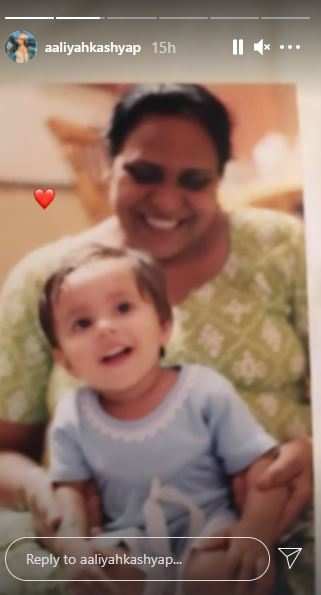 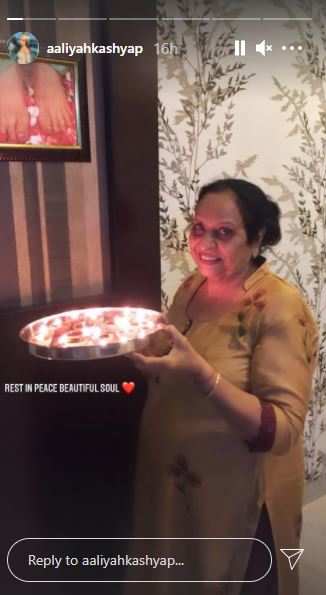 Anurag had also shared the news on Twitter. He had written, “Krishna Bajaj passed away this morning. Just want to thank everyone who tried to help Aarti, and her family,to do the best possible that they could . She was a woman so full of love . May she rest in peace .”

Krishna Bajaj passed away this morning. Just want to thank everyone who tried to help Aarti, and her family,to do t… https://t.co/52UMIT4eil

Meanwhile, Anurag’s daughter Aaliyah recently opened up on battling mental health issues. She also said that she has been dealing with anxiety and depression issues since she was 13 or 14. In a video, the star kid revealed that her mental health deteriorated and her issues aggravated after she tested positive for Covid-19. She further also added that a panic attack landed her in the hospital. Aaliyah said, “It felt like this was it for me and I was going to die. Mind you, I have had panic attacks before but nothing like this, ever.”

Soha shares a cute video of her daughter 1 min read

Soha shares a cute video of her daughter

Nitin Desai on fire on the set of Jodha Akbar