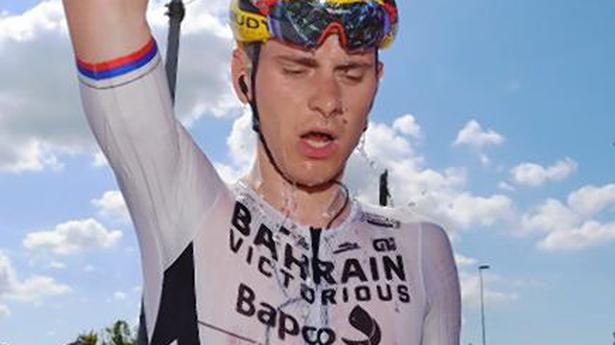 Bahrain Victorious’ Slovenian rider Matej Mohoric won stage 19 of the Tour de France on Friday, a day after his team hotel and bus were subjected to a huge police swoop.

It was Mohoric’s second win on this edition of the Tour, and was achieved after he joined an early break and then broke clear for a solo win at Libourne, with the main peloton several minutes adrift.

Mohoric made a gesture at the finish line running a finger across his lips horizontally after the team’s third victory of this year’s race.

The Bahrain Victorious rider has vehemently denied any anti-doping offences and instead insisted his Tour preparations had been hit by missing out on a massage and meal after the overnight Wednesday police raid. No charges have been announced as yet although legal proceedings are underway.

The 19th stage had been billed as the day Mark Cavendish would set a new record of 35 Tour de France stage wins with his fifth win on the 2021 edition.

But an early mass fall and lack of will from other teams to stop a breakaway allowed a large group to build up a 15-minute lead over the main pack.