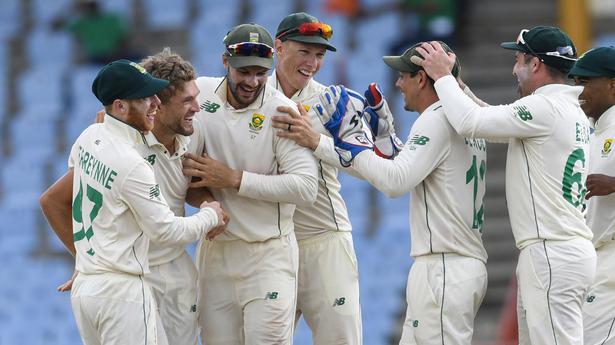 After making 298 in its first innings, South Africa will start its second innings on the third day with a lead of 149

South Africa’s bowlers backed up a solid batting performance to put the Proteas in a command of the second cricket test against the West Indies at the end of the second day on June 19.

Kagiso Rabada, Lungi Ngidi and Anrich Nortje crashed through the West Indies’ top and middle order while Wiaan Mulder took three wickets for one run to wrap up the tail as South Africa bowled out the home side for 149 in exactly two sessions.

After making 298 in its first innings, South Africa will start its second innings on the third day with a lead of 149.

Shai Hope, who made 43, and Jermaine Blackwood, who was the last man out for 49, attempted to arrest another West Indies collapse, first in a partnership of 43 for the fifth wicket.

The West Indies top order capitulated again in the face of South Africa’s accurate fast bowling. Captain Kraigg Brathwaite was out to the first ball of the innings and the West Indies slumped to 54-4 when Hope and Blackwood came together.

That start followed the pattern of the series to date: The West Indies was 56-7 in the first innings of the first test before being dismissed for 97, and 51-4 in its second innings on its way to an innings defeat.

Hope was batting well when he fell to Ngidi, dragging onto his stumps a ball that began to jag back sharply from wide of off stump.

Blackwood attempted to rally the West Indies’ batsmen but with little success. Mulder and Keshav Maharaj (2-47) helped subdue the lower order and, after Hope and Blackwood, only two other West Indies batsmen reached double figures.

“We wanted to be in a better position than this obviously,” Hope said. “We worked very hard yesterday to limit them to that score overnight.

“To do all that hard work with the ball makes it disappointing to be in the position we’re in at the moment.”

“They’re decent bowlers, I must give them credit,” he said. “Cricket is one of those games where whoever plays best on the day will come out on top.

“They’re quality bowlers and we need to make sure we can find a game plan to combat their skills.”

Earlier, Quinton de Kock missed out on a second successive century and was out for 96 to drag South Africa to 298. De Kock’s edge off the bowling of Kyle Mayers flicked the gloves of wicketkeeper Joshua Da Silva standing up and looped to Hope in the slips for a simple catch.

That denied de Kock another ton after his 141 not out in the first test set up South Africa’s innings win and 1-0 lead in the two-match series. That was de Kock’s first test since giving up the captaincy.

Medium pacer Mayers took 3-28 and Kemar Roach 3-45 as West Indies kept on top of South Africa, with the exception of de Kock.

South Africa started the day on 218-5 after a delay in the morning because of a wet outfield in St. Lucia.

De Kock hit eight fours to once again be the rock of the South Africa innings. Kagiso Rabada cracked 21 from 23 balls at the end to see South Africa to the brink of 300.